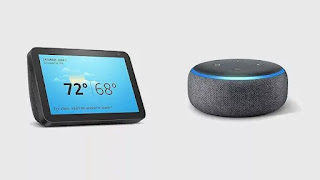 The Amazon’s 99-Cent Echo Dot Deal Is Back, You Can Get Yours!!

Amazon Echo Dot. Amazon Echo Dot is the latest addition to Amazon’s Echo line of cylindrical voice-controlled computing devices that connect to the Alexa Voice Service for providing responses to questions, playing music, reporting on weather, news or sports scores and more.
An Amazon Echo Dot (2nd Generation) multimedia.
PHILIP BARKER/FUTURE PUBLISHING VIA GETTY IMAGES.
It’s not often that you can find a really great deal on one of the industry’s most popular smart home devices, but Amazon is offering one of the best you’ll ever see.
If you head to Amzon right now and sign up for the company’s Music Unlimited subscription, which costs $7.99 per month for Amazon Prime members and $9.99 per month for non-Prime subscribers, you’ll get an Amazon Echo Dot for just 99 cents. Not bad, considering the Echo Dot usually costs $50.
SHOP NOW
The Echo Dot in question is the third-generation model, which comes with Alexa support and a solid-sounding speaker for such a small device. Best of all, it works with all of your smart home products, so you can call on the Echo Dot to turn on lights, adjust your thermostat and listen to all the music you want most.
Amazon’s deal is a little restrictive, since if you’re already a Music Unlimited subscriber, you can’t access the deal. That said, if you had been on a trial in the past or you had been a Music Unlimited subscriber and quit your subscription, you should be able to sign up again and take advantage of the deal.
If you’re unfamiliar with Music Unlimited, it’s Amazon’s answer to Apple Music and Spotify, and allows you to stream all the music you care about whenever and wherever you want.
Amazon’s offer is part of a broader effort by the company to get many more Echo Dots into homes. In addition to this deal, the Echo Dot has been thrown in a variety of sales for free or with a reduced cost. That all aimed at getting Amazon’s penetration in the smart home market even deeper.
But if you’re a music fan and have designs on improving your smart home on the cheap, going with this offer might be a great way to go about it. Best of all, you can end your Music Unlimited subscription after you get the Echo Dot, if you decide the $8.98 you paid for the bundle is more than enough.